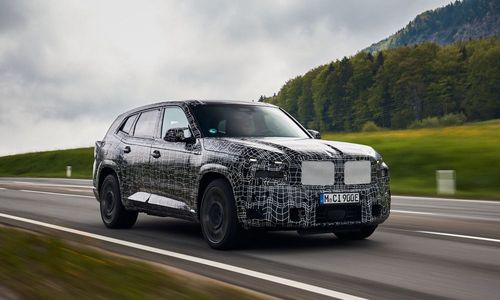 BMW is set to unveil the much-anticipated XM performance SUV globally on September 27. The XM marks the start of the push towards electrification from BMW’s M performance brand and is only the second-ever model to have been exclusive to the performance arm. The XM, previewed by a concept of the same name late last year, is the first model since the iconic M1 to be bespoke to the performance arm and will feature a plug-in-hybrid powertrain built around BMW M’s 4.4-litre twin-turbo V8.

In terms of designs, teasers and prototype images shared by BMW reveal that the production SUV shares much of the styling of the XM concept. The wide BMW kidney grille is flanked by split headlamp units with a slim high set LED DRLs and the main unit positioned below – a design direction now followed by the 7 Series and X7. Round the side and rear too the design is little changed from the concept with the proportions, window line and exhaust following a similar design to the concept.

ALSO READ:  AAP Party Plans to Live-stream All it's Meetings with Beurocrats in Delhi

Coming to the powertrain, BMW has confirmed that the PHEV set-up will be based around BMW M’s 4.4-litre twin-turbo V8 with total system output of 644 bhp and 800 Nm sent to all four wheels via a new hybrid-specific xDrive system. While full details of the hybrid system remain under wraps, BMW says it will allow for up to 80km of all-electric driving.

BMW M has also stated that the XM will have 50:50 weight distribution and feature adaptive M suspension as standard. The company says that the suspension springs and adaptive dampers will be unique to the XM. A first in the XM will be the use of a 48V roll stabilisation system – a system not yet offered by BMW M on any of its cars. Also part of the standard kit will be Integral Active Steering – another first on a BMW M car. The system essentially works by turning the front wheels to a greater or lesser degree based on the vehicle’s speed for the same steering input.

Stopping power will come from a model-specific M brake system with the SUV to be offered with up to 23-inch wheels. BMW says that the new XM will go into production by December 2022 at the BMW Group Plant in Spartanburg, USA.