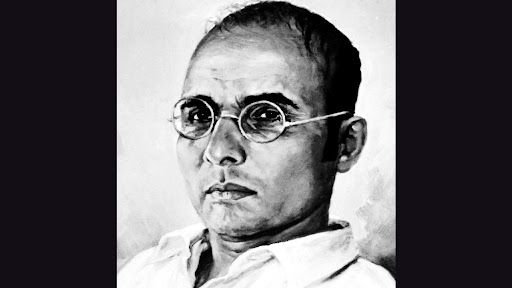 Bengaluru, August 27: After violence over removal of Veer Savarkar’s flexes in Shivamogga and opposition to placing his picture next to Lord Ganesh’s idols during Vinayak Chaturthi, the social media is discussing exaggeration of Veer Savarkar in school textbooks. With this, the textbook revision row has yet again resurfaced in the state. The education department has replaced a lesson from the Kannada textbook for Class 8.

The previous lesson “Blood Group” authored by Vijayamala has been replaced with “Kalavanu Geddavaru” (Those who won against time) lesson by K.K. Gatti. The lesson is the first person account of the author’s visit to Andaman cellular jail where Veer Savarkar was kept.

The writer has also depicted the cell of Veer Savarkar and stated that though Savarkar’s cell did not have any ventilation, BulBul birds managed to fly in and Savarkar sat on their wings and touched the earth of motherland every day. The social media campaign says the facts have been exaggerated.

Meanwhile, Tumakuru University in Karnataka is all set to establish the Research centre on Veer Savarkar, which is likely to create fresh controversy. The syndicate meeting has approved the decision and preparations are on to submit a proposal in this regard to the government, sources explained.