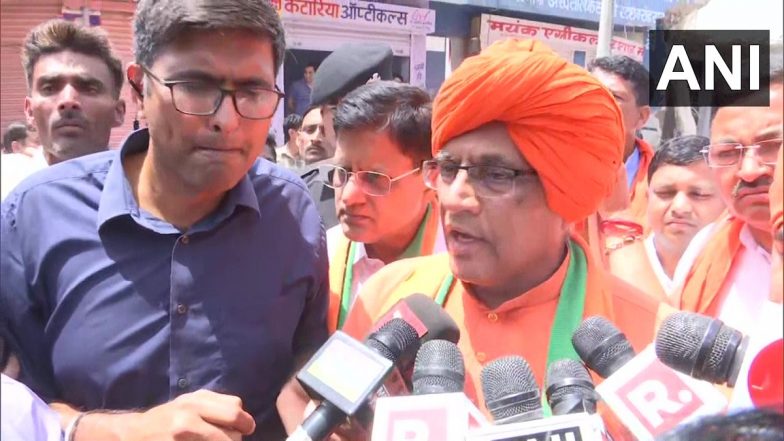 Jaipur, April 25: BJP MP Sumedhanand Saraswati Monday demanded the Rajasthan government apologise for the demolition of two temples in Alwar and rebuild them, as he also sought a judicial inquiry into the alleged harassment of people during the anti-encroachment drive last week.

The temples and some other structures were demolished last week in Alwar district’s Rajgarh with officials describing the action as part of an anti-encroachment drive to widen a road in the municipal town.

Saraswati told a press conference here on Monday that people who possess authorised land deeds for the demolished houses or shops should be compensated and their structures rebuilt.

The officers who conducted the drive “without” giving any notice and “harassed” people should be punished and a judicial inquiry be conducted, he said. Saraswati, who was part of a team constituted by the state BJP to investigate the temple demolition, submitted a report on Monday to BJP state president Satish Poonia.

On Saturday, a five-member BJP committee headed Poonia visited Rajgarh in Alwar where the two temples were among other structures removed by bulldozers by the Rajgarh Nagar Palika.

Saraswati hit back at the statement of minister Pratap Singh Khachariawas that “sannyasis dressed in saffron clothes tell lies”, saying “they should look into their own conscience”.

He said the meeting of the Board of Rajgarh Municipality, which is ruled by the BJP, on the anti-encroachment drive was held in the presence of Congress MLA Johari Lal Meena and Councillor Rajendra Deharwal who said “the houses should be demolished by giving only three days’ notice”.

He claimed that in the original proposal, the board had asked just to identify the structures built on encroached land. “As part of the removal of encroachments, they were neither marked nor served a notice nor given an opportunity of hearing before the demolition. They were broken by bulldozers directly,” he said.