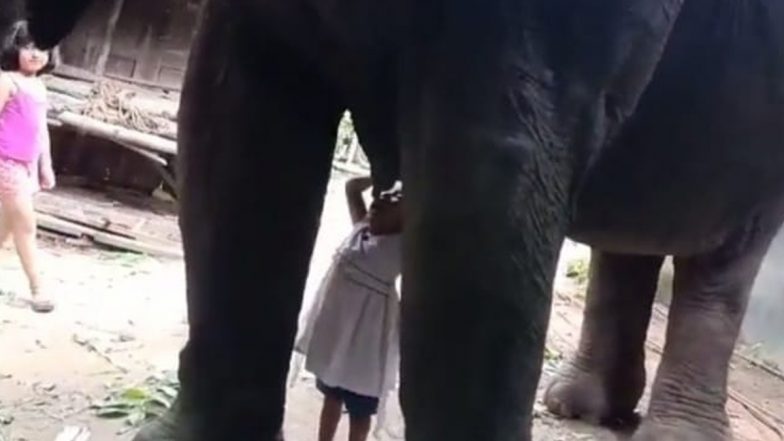 Guwahati, Jan 30: People generally consume milk of domestic animals like cows, goats, buffaloes, but a toddler girl in Assam’s Golaghat district drank milk from an elephant, making everyone witness a fabulous bonding of love between an animal mother and a human child.

The video, which went viral, shows three-year-old Harshita Bora playing with their domestic elephant at their courtyard and drinking its milk.

According to the video, Harshita was asking the elephant to move to allow her drink milk and the jumbo complied and allowed the little girl to consume its milk. The girl’s elder sister and her other family members witnessed the happening and encouraged the girl. According to the neighbours, Harshita calls the elephant ‘Binu’ and is often seen playing with it.

ALSO READ:  Shiv Sena is a "Big Brother" in Maharashtra and Will Remain the Same in Future As Well - Shiv Sena Leader Sanjay Raut

Here is the Video of Toddler Girl Drinking Elephant Milk:

The incident comes at a time when man-animal conflicts, especially of human-elephant, are rising in different districts of Assam.

According to the official record, over 100 people died in 2021 due to elephant attacks while 71 elephants have died in different districts of Assam due to various causes including electrocution, poisoning, being hit by speeding train, and ‘accidental’ deaths including plunging into ponds and ditches, or lightning strikes.

Gujarat: Leopard Kills 3-Year-Old Girl in Amreli While Playing Outside Her House