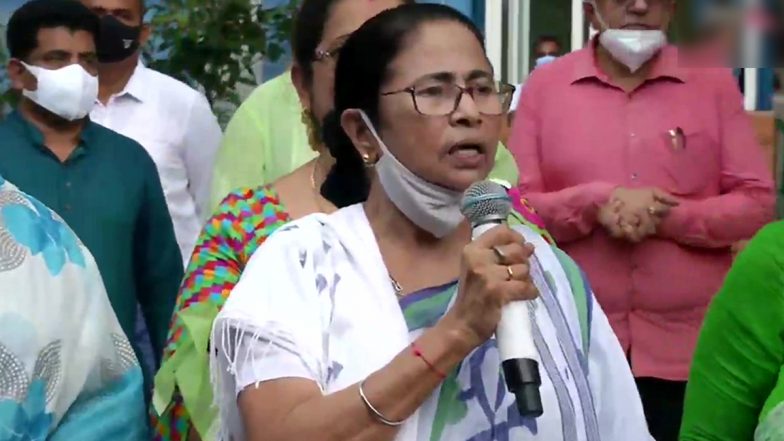 Panaji, December 14: West Bengal Chief Minister Mamata Banerjee on Tuesday said Prime Minister Narendra Modi remembers the Ganga river, which is regarded as the “mai” (mother) by lakhs, only during elections to get votes, a day after he took a ritualistic dip in the holy river before inaugurating the Kashi Vishwanath Dham (KVD) in Varanasi.

Addressing a public meeting at Assnora village in North Goa on the last day of her two-day visit to Goa, the TMC supremo said the prime minister can do anything to get votes and recalled his visit to Uttarakhand for performing “tapasya” (meditation).

She also alleged that the BJP government in Uttar Pradesh made the Ganga river “impure by throwing unclaimed bodies of COVID-19 victims”. Banerjee said around 23 lakh people visit Gangasgar in West Bengal to participate in the Gangasagar mela like the Kumbh congregation.

The swipe at PM Modi came in reference to his visit to a cave near the Kedarnath temple where he had spent a day meditating after the election campaign for the 2019 Lok Sabha polls, which the BJP won. The West Bengal chief minister accused the Yogi Adityanath government in UP of throwing unclaimed bodies of the COVID-19 victims in the Ganga river.

“They have made the Gangamai (mother Ganga) ‘apavitra’ (impure). We call the Ganga water pure. We call the river our mother. But the BJP has thrown COVID-19 dead bodies in the Ganga river. We don’t like it,” she said. Banerjee, who is projecting herself as the opposition pivot to take on the BJP and whose party is contesting the maiden assembly elections in Goa, was livid at the “Bengali party” tag assigned to the TMC.

“They say we are Bengalis, (but) who are they? They are Gujaratis. Did we ever say that he is a Gujarati and he should not come here? If Gujaratis can go anywhere in the entire country, why can’t Bengalis go? If a Bengali can write the National Anthem, can’t he come to Goa?” she questioned. Banerjee said Mahatma Gandhi was seen as the leader of the entire nation and not of any state.

“We don’t think which part of the country he belonged to. A true leader should take the country together,” she commented. The West Bengal chief minister said that “Goa will not be run from Gujarat or Delhi but Goans will run their state.