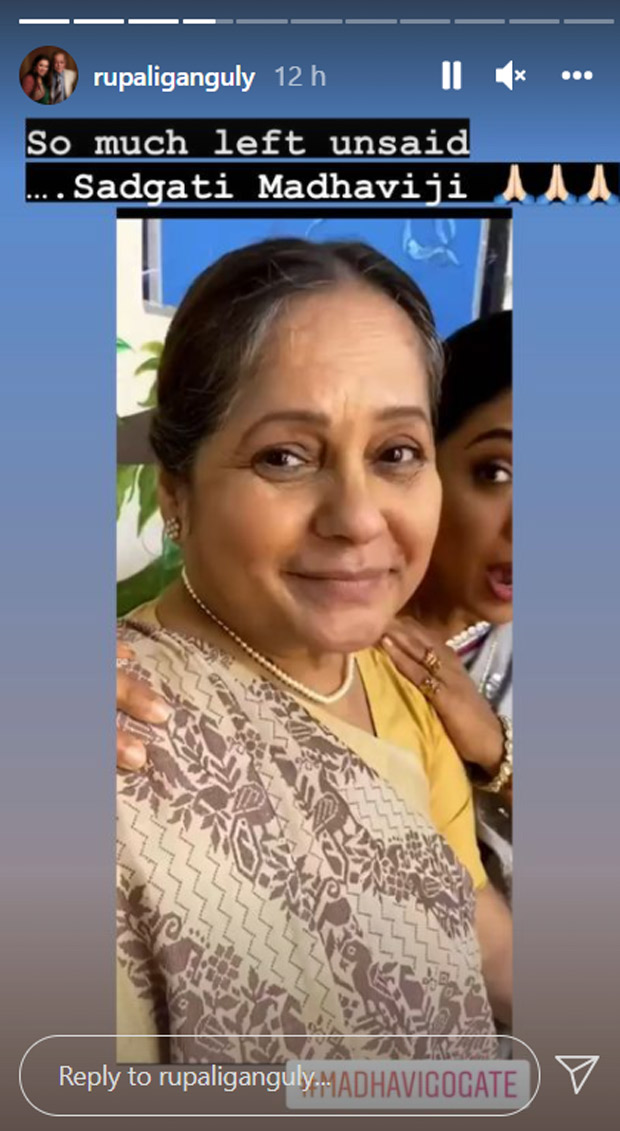 Hit TV show Anupamaa fame, Madhavi Gogate, who plays Rupali Ganguly aka Anupamaa’s mother, has passed away aged 58. As per reports, the actress had tested positive for Covid-19 a few days ago.

There were also reports that the veteran actress had been admitted to the hospital and was recovering from Covid infection. But her condition deteriorated and she breathed her last in the afternoon on November 21. Madhavi’s former co-star Rupali Ganguly shared a post on her social media account and wrote, “So much left unsaid. Sadgati Madhaviji.” Rupali also re-shared some of her stills with Madhavi from Anupamaa, shared online by fan accounts.

TV actress Nilu Kohli also mourned the demise of the veteran actor in a social media post, writing, “Madhavi Gogate my dear friend nooooo. I can’t get down to believing that you have left us. Heartbroken @gogatemadhavi you were too young to go. Damn Covid. I wish I had picked up that damn phone and spoken to you when you did not reply to my msg. All I can do is regret now (sic).”

Madhavi passed away at Seven Hills hospital in Mumbai. She has done notable work in films and TV shows. She rose to fame with the Marathi film Ghanchakkar opposite Ashok Saraf. Her popular plays were Bhramacha Bhopala, Gela Madhav Kunikade, as reported by a tabloid. She recently made her Marathi TV debut with Tuza Maza Jamtay. Madhavi has also featured in various Hindi TV shows like Koi Apna Sa, Aisa Kabhi Socha Na Tha, Kahin Toh Hoga, among others.

ALSO READ:  Don't want to be AAP party member for the name sake - Ashish Khetan after his resignation