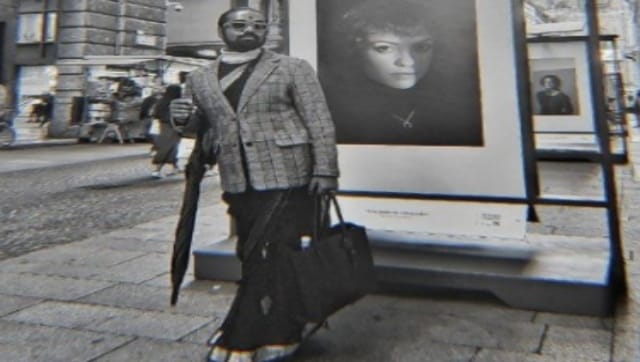 Pushpak Sen can be seen wearing a black saree which he has combined with a coat. To complete the look, he has opted for a bold red bindi and black sunglasses.

An image of Pushpak Sen in a saree in Milan. Instagram/@
thebongmunda

A Bengali man is creating waves for his androgynous style and the Internet is in awe with his revolutionary fashion statement.

Pushpak Sen from Kolkata has grabbed the limelight for wearing a saree on the streets of Milan. Sen is a fashion marketing and communications student in Italy. The man posted photos from his fiery photoshoot on Instagram.

Sen can be seen wearing a black saree which he has combined with a coat. To complete the look, he has opted for a bold red bindi and black sunglasses. Sen has completed his quirky Bengali look by tying his hair in a bun.

Sen wrote in his caption that people told him that being a man would take him nowhere. He further added that guess who is walking in a saree on the streets of one of the major fashion capitals of the world.

The 26-year-old said that once he shifted to Italy for studies, he always made it a point to wear a saree more frequently than he used to do earlier. He also said that he wears a saree to college also.

ALSO READ:  How to keep Unnecessary Calories away during Festive Season?

Sen, who goes by the Instagram handle @thebongmunda, said that his photoshoot was impromptu and was quite exciting. He came to Milan and it was just not possible for him to not get clicked in a saree on the streets. Wearing a saree is also his way of representing his Bengali culture and taking it to places.

His Instagram profile is filled with pictures of him donning the six-yard, flaunting the traditional dress through various fashion combinations. He has also tried to promote handloom weaving through his sarees.

This is not the first time that Sen has created waves on the internet. In the year 2020, another picture of Sen in kohl-lined eyes and bright red lipstick went viral. He had posted this picture to stand in solidarity with his mother who was slut-shamed at a family gathering for her lip color choice.