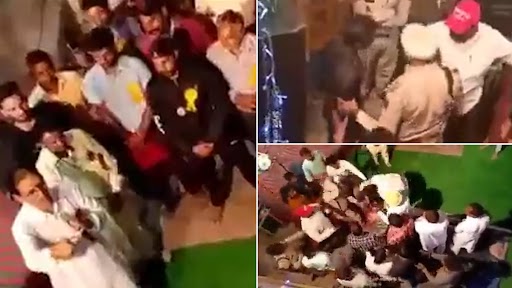 Chandigarh, October 20: In an apparent embarrassment for the ruling Congress in Punjab, its legislator Joginder Pal and his security men allegedly assaulted a youth who questioned him about the work done in the constituency in nearly five years. A video of the incident has gone viral on social media. The video shows the legislator, dressed in a white kurta, talking about the development work carried out by him in his Boha constituency in Pathankot district.

When he was publicly confronted by the youth about what exactly he has done for this constituency, the legislator first asked the youth to approach him and then started beating him. The legislator and his gunmen can be seen beating up the youth who asked, “What have you really done?”

CONgress MLA Joginder Pal from Bhoa assembly in Punjab beats up a Youth along with his Police security.

The mistake of the Youth?

He dared to question the MLA about his work in the last 4.5 years.

And they say that CONgress has faith in Democracy !

The victim’s mother pleaded for action against the legislator. “My son just asked the MLA about the development works carried out by him in the constituency and he was beaten up for this,” she told the media.

Responding to the incident, Home Minister Sukhjinder Singh Randhawa said the MLA should not have behaved in this fashion. “We are the people’s representatives and here to serve them,” Randhawa said.

Describing the incident as a shameless act, the Shiromani Akali Dal (SAD) said, “Ask a question and this is what you get in return.” “INC Punjab MLA Joginder Pal along with the police, thrashed a man who took an account of his non-performance. Get ready to face the consequences, people will resolutely revert to this slap on democracy in 2022,” the party tweeted.

Ludhiana Shocks: Sister Out to Buy Rakhi Mowed down by Man Suffering Cardiac Arrest while Driving

Punjab CM “pulls up” Navjot Singh Siddhu for “Gross Indiscipline”, Challenges to Contest against Him from Patiala