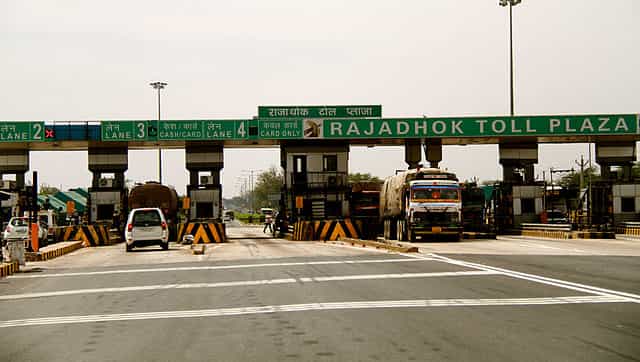 In the video, the MLA can be seen angrily walking up to the worker and slapping him after the boom barrier fell in front of his car

A Bharatiya Janata Party (BJP) MLA from Mathura’s Baldeo constituency slapped a toll plaza worker after his car was accidentally stopped for a few seconds by the boom barrier. The MLA identified as Pooran Prakash has earlier been involved in a brawl at the same booth over a similar incident in 2018.

This recent incident was caught on CCTV at Mahuan toll plaza on Saturday (24 July) evening. In the video, the MLA can be seen angrily walking up to the worker and slapping him after the boom barrier fell in front of his car.

Prakash, who was heading to Mathura from Agra, shouted at the workers standing and said “how many times you (toll plaza staff) commit a mistake and apologise for it. You are damaging the government’s image by doing such things”.

Following this, he also called up the police and complained against the worker at the toll plaza staff. Through his phone, he informed that he will not tolerate such an act in his constituency.

Meanwhile, MLA Prakash alleged that he became angry after seeing an ambulance being stuck in a traffic jam on Agra-Delhi National Highway-2 as per the Times of India report. The minister further stated that the ambulance had to halt for a long time, due to the closure of three out of four lanes at the plaza. Despite that, the staff at the toll were not doing anything about it.

ALSO READ:  What Students and Teachers of India Got from Union Budget 2018?

But when the toll plaza management was questioned on MLA Prakash’s claim, they totally denied his statement asserting that there was no jam of vehicles during that time. “There was no traffic jam and all the 7 lanes on each side were functional,” toll plaza manager Rajjan Kumar said. He also specified that after the incident, 28 vehicles were allowed to pass in 18 minutes without paying tax. This incurred a loss of Rs 8,500 on that day.

As per the CCTV footage, it shows that the car was passing through lane 14 at the plaza when suddenly the barrier fell in front of it. Further in the video, it also shows that the barrier was lifted within a few seconds. Despite that, the MLA got angry and slapped the staffer standing near the gate.