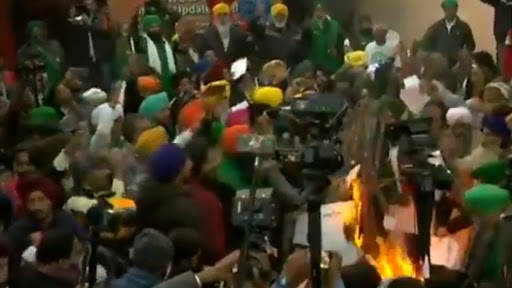 New Delhi, January 13: The farmers protesting at Delhi’s Singhu Border were seen burning copies of the Farm Laws. The protesting farmers at Delhi borders had said they will burn copies of Centre’s new agriculture laws at all demonstration sites on the festival of Lohri on Wednesday, as a mark of protest against the legislations. On Wednesday, farmers’ leader Manjeet Singh Rai had said they will celebrate Lohri by burning the copies of farm laws at all protest sites in the evening. In a tweet by ANI, Congress MP from Amritsar, Gurjeet Singh Aujla was seen tearing and burning a copy of the farm laws at Jantar Mantar in Delhi.

ALSO READ:  Nirbhaya Gangrape Convicts get 7 Days to Apply for their Mercy Petition

According to reports, Sankyukt Kisan Morcha, an umbrella body of around 40 protesting farmer unions, is set to hold a meeting later in the day to discuss the next course of action. The festival of Lohri marks the beginning of the spring season. It is mostly celebrated in north India. Bonfires are a special characteristic of the festival. Earlier this month, farmer leaders protesting at the Singhu border had said they will celebrate the festival of Lohri on January 13 by burning copies of newly introduced agriculture laws.

On Tuesday, the Supreme Court stayed implementation of the controversial farm laws till further orders. A four-member committee has been set up to resolve the impasse between the Centre and the farmer unions protesting at Delhi’s borders over the legislations. Amid the cold weather conditions, thousands of farmers, mostly from UP, Haryana and Punjab, have been protesting at several border points of Delhi since November 28, 2020. They have been demanding a repeal of the three laws and a legal guarantee to the minimum support price (MSP) system for their crops.