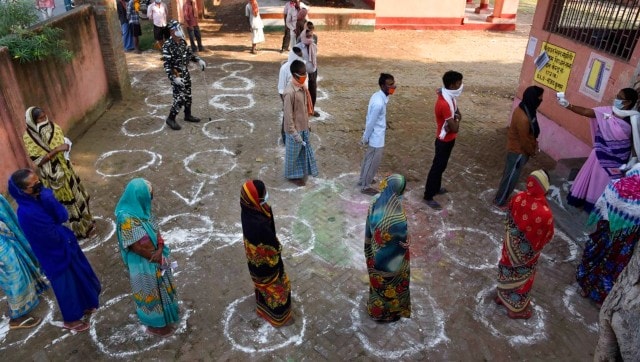 The second phase of the Bihar Assembly election is slated to be held on Tuesday (3 November).

The second phase is arguably the most crucial of the three phases of the Assembly election. Over 2.85 crore voters will decide the fate of nearly 1,500 candidates on Tuesday.

Voting will take place in 94 Assembly segments, more than a third of the 243-member-strong Assembly spread across 17 districts. With the exception of three districts — Patna, Bhagalpur, and Nalanda — the other districts heading to polls on Tuesday are situated north of the Ganga river. The districts in which polls will be held in the second phase are West Champaran, East Champaran, Sheohar, Sitamarhi, Madhubani, Darbhanga, Muzaffarpur, Gopalganj, Siwan, Saran, Vaishali, Samastipur, Begusarai, Khagaria, Bhagalpur, Nalanda, and Patna.

The first phase of the state polls, when a relatively turnout of 55.68 percent was recorded, was conducted on 28 October.

The Election Commission has said voting will begin as usual at 7 am in Bihar but the period will be extended by one hour until 6 pm, except in the Left Wing Extremism affected areas, so that COVID-19 patients can vote in the last hour of the day.

Chief Electoral Officer HR Srinivasa said that polling in eight Naxal-affected constituencies including Raghopur, Paru, Minapur, and Alauli will be held only till 4 pm.

Political parties in the fray

The CPI and CPM, which joined the Grand Alliance recently, are fighting four seats each. Quite a few seats are being contested by the CPI(ML), the Left outfit with the strongest presence in Bihar.

BJP candidates are in the fray in 46 of the seats, while another 43 are being contested by those with JD(U) tickets.

The LJP is contesting 52 seats, including the two it had won in 2015 contesting as an NDA constituent. The party has fielded one transgender candidate too in this phase.

This phase is very crucial for Chirag Paswan-led Lok Janshakti Party which has fielded 52 candidates. Their performance in this phase will indicate if the issues raised by Paswan during his campaign —  corruption charges against Nitish Kumar, education degrees getting delayed, lack of jobs, and migration for livelihood —  found resonance among the people.

Maharajganj has the maximum number of 27 candidates for any constituency while Darauli (04) has the lowest.

Notable among the candidates is the RJD’s Tejashwi Yadav, the opposition Grand Alliance’s Chief Ministerial candidate, who has been aggressively trying to cash in on the anti-incumbency factor against the Nitish Kumar government.

The BJP has retained its trust in Satish Kumar, hoping that the giant killer will be able to do a repeat of 2010 when, like this time, JD(U) president and Chief Minister Nitish Kumar was with the NDA.

Tejashwi’s elder brother Tej Pratap Yadav is trying his luck from Hasanpur in Samastipur district, shifting his base from Mahua in Vaishali.

There were said to be fears in the RJD camp that Tej Pratap’s bid to retain Mahua could be challenged by the NDA through his estranged wife Aishwarya Rai as its trump card.

She is already taking an active part in the campaign for her father Chandrika Roy in Parsa, which he has represented a number of times and is seeking to retain on a JD(U) ticket this time.

State minister Nand Kishore Yadav is in the fray trying to retain Patna Sahib for a seventh consecutive term.

Multiple-term MLA Nitin Nabin faces a challenge in Bankipur from Congress candidate Luv Sinha, who is the son of actor-turned-politician Shatrughan Sinha, a two-time local MP who lost the seat when he entered the fray after quitting the BJP.

The BJP has retained as its candidates Arun Sinha and Sanjiv Chaurasia for Kumhrar and Digha respectively.

Meanwhile, the JD(U) has suffered a setback in the reserved Rajgir seat where its sitting MLA Ravi Jyoti, a former police inspector, is now the fray on a Congress ticket.

Two other ministers Ram Sevak Singh of the JD(U) and Rana Randhir Singh of the BJP are trying their luck from Hathua and Madhuban in Gopalganj and East Champaran districts respectively. The ministers are sitting MLAs from the respective seats.

The 31-year-old RJD leader, Tejashwi Yadav, the chief ministerial face of the Grand Alliance is seeking re-election from Raghopur in Vaishali district which he had wrested back for his party from the BJP’s Satish Kumar in 2015. The BJP leader had defeated Yadav’s mother Rabri Devi, a former chief minister, in 2010.

Raghopur in Vaishali and Hasanpur in Samastipur districts will vote in this phase, deciding the fate of brothers Tejashwi Yadav and Tej Pratap Yadav respectively.

Another key seat is that of Raghopur, where the RJD’s chief minister nominee and anointed heir of Lalu Prasad, Tejashvi appears safe but, at Hasanpur, Tej Pratap is locked in a tough battle against two-time sitting MLA Rajkumar Rai of JD(U) as per The Hindu.

Seven constituencies of Nalanda district, to which Chief Minister Nitish Kumar belongs, also go to polls in the second phase.

All the four Assembly segments in the capital city Patna Sahib, Kumhrar, Bankipur and Digha are also going to polls in the second phase. All these are held by the BJP.

Barring Hilsa, represented by the RJD’s Shakti Singh Yadav, and Bihar Sharif, which two-term MLA Sunil Kumar retained on a BJP ticket in 2015, all the remaining five were won by the JD(U).

The Assembly segment named after the district is represented by state minister Shrawan Kumar who is seeking re-election from the seat.

In the last election, the RJD, JD(U), and Congress combine, which were part of the Grand Alliance, had won 70 of these 94 seats. The BJP won 20, LJP 2, CPI-ML, and independent 1 each, according to Hindustan Times.

The Centre has directed the deployment of about 30,000 Central security force personnel for the conduct of the three-phase assembly polls in Bihar

A single company of these forces has an operational strength of about 100 personnel.

The home ministry, in an order, has said that the CRPF will be the nodal agency for the deployment of these central forces in the state and it will coordinate with the state agencies for moving these contingents in Bihar.

The Election Commission listed out several protocols aimed at preventing the spread of the coronavirus while announcing the poll schedule. The commission said 7 lakh hand sanitizers, 46 lakh masks, 6 lakh PPE kits, 6.7 lakh face shields, and 23 lakh pairs of hand gloves have been arranged for the Bihar polls.

Besides, the postal ballot facility will be provided wherever required and requested, the poll panel said.

COVID-19 patients can vote in the last hour of the day, Chief Election Commissioner Sunil Arora said. He also said special protocols have been readied for voters who are COVID-19 patients.