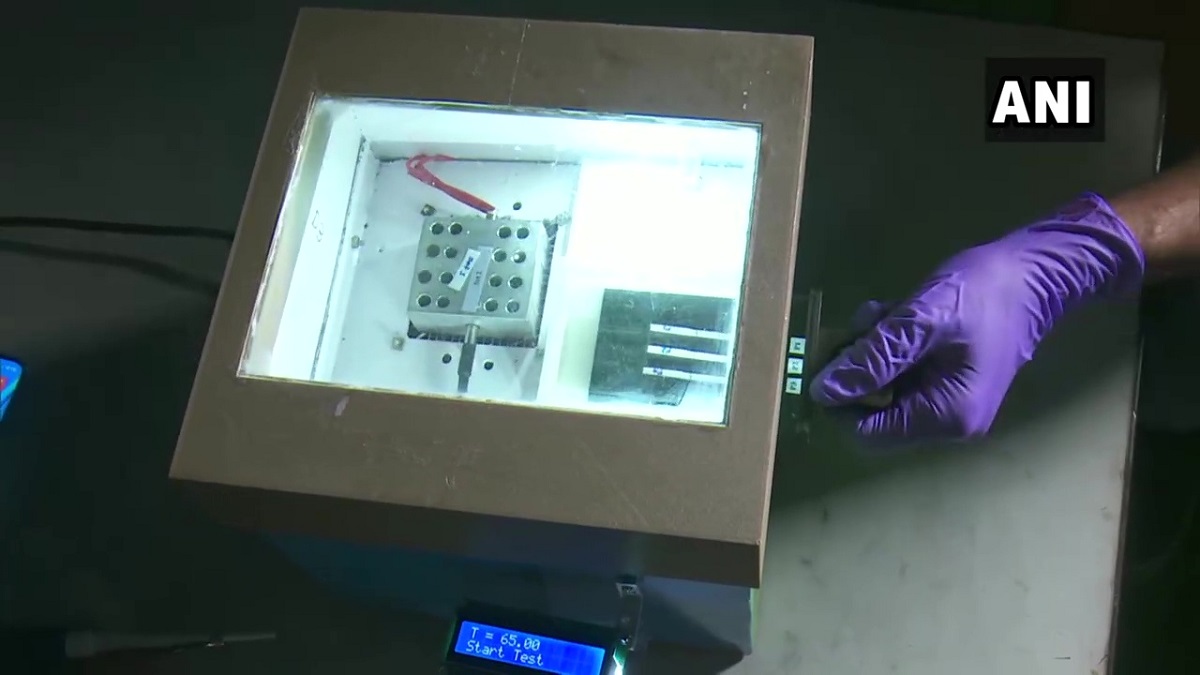 New Delhi, October 21: The Indian Institute of Technology (IIT)-Kharagpur has developed a low-cost portable COVID-19 testing device that can deliver results within an hour and it has also received certification from the Indian Council of Medical Research (ICMR).

According to IIT-Kharagpur officials, ‘COVIRAP’ is a cuboid-shaped portable testing device that can deliver results in an hour, making it an effective tool to scale up coronavirus screening in peripheral and rural areas.

West Bengal: IIT Kharagpur researchers claim that ‘COVIRAP,’ the diagnostic machine developed by them, has been successfully validated for its efficacy in #COVID19 detection by ICMR. IIT says that various commercial units have already approached them for technology licensing. pic.twitter.com/w30gW9Zbph

“This innovation has made high-quality and accurate COVID testing affordable for the common people with a testing cost of around Rs 500 which can further be reduced through government intervention. This machine can be developed at a cost of less than Rs 10,000 with minimal infrastructural requirement making the technology affordable to common people. The testing process in this new machine is completed within one hour,” Union Education Minister Ramesh Pokhriyal ‘Nishank’ said.

He said the device would go on impacting the lives of many in rural India as the device is portable and can be operated on a very low energy supply. Minimally trained rural youth can operate this device.

According to VK Tewari, Director, IIT-Kharagpur, “the innovation is set to replace PCR-based tests to a large extent. While the Institute can produce the testing kit up to a certain scale, patent licensing will facilitate commercialisation opportunities for medical technology companies. Any corporate or start-up can approach the institute for technology licensing and commercial scale of production”.

Elaborating on the validation process of ‘COVIRAP’ diagnostic test, Mamta Chawla Sarkar, an internationally acclaimed virologist who oversaw the patient trials on behalf of ICMR-National Institute of Cholera and Enteric Diseases (NICED), said a detailed scrutiny of the testing results has clearly shown that this assay holds the capability of detecting extremely low levels of viral loads that any other method based on similar principles of testing, even those from the most celebrated research groups across the world, could not come up with so far.

“This means that very early stages of infection can be detected, thereby isolating the patient and arresting the uncontrolled spread of infection in the community via asymptomatic patients,” she said. According to the research team, the number of tests per one-hour batch in a single machine unit can be further increased to much higher limits, for the purpose of testing on a mass scale.

“The patented machine unit has not only been proven to be robust during patient sample testing but also extremely flexible and generic. This means that other than COVID-19 testing, many other tests, falling under the category of isothermal nucleic acid-based tests (INAT), can be performed in the same machine,” Suman Chakraborty, professor, Department of Mechanical Engineering Department, IIT-Kharagpur.

ALSO READ:  How to keep Unnecessary Calories away during Festive Season?

“This implies influenza, malaria, dengue, Japanese encephalitis, tuberculosis and many other infectious, as well as vector-borne diseases, can be tested using the same machine. This will virtually minimise the need for thermal cyclers or real-time PCR machines, without sacrificing the expected high standards of a molecular diagnostic test,” Chakraborty said.

The number of new coronavirus infections reported in India in a span of 24 hours remained below 60,000 for the third consecutive day, taking the COVID-19 caseload to 76,51,107, according to the Union Health Ministry data updated on Wednesday.