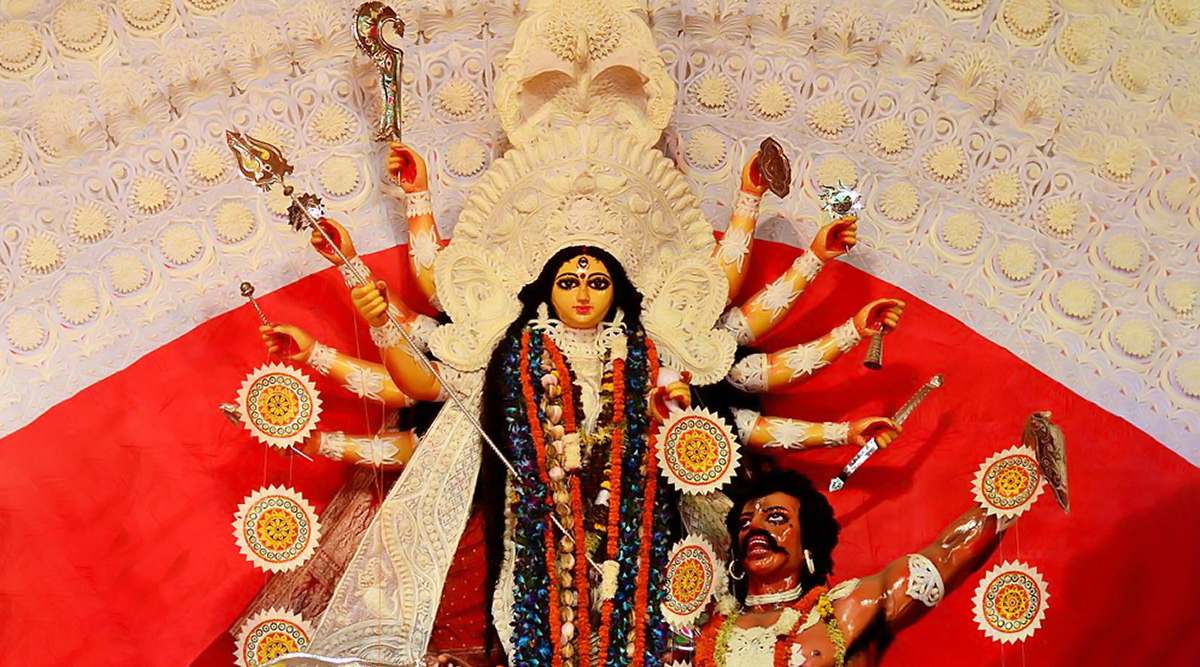 Kolkata, October 20: Community Durga Puja organisers in Kolkata said on Monday that they are staring at huge financial losses after the Calcutta High Court ordered that the pandals will be no-entry zones for visitors in wake of the COVID-19 pandemic. The organisers said that they hope the state government would issue a fresh advisory, following the court order, making the situation clearer.

“Just imagine, the few sponsors we managed to get amid the pandemic will no more be interested in backing us if there are no visitors at the pandals. All the puja committees will incur losses to the tune of hundreds of crores of rupees as all preparations have been made,” said Soumen Dutta, the general secretary of award-winning Kashi Bose Lane Puja Committee in north Kolkata.

Noting that they will take all measures to enforce the court’s order, he said, “We are staring at huge financial losses.

Dutta said that stipulation of barriers 10 metre away for big pujas located in narrow lanes would lead to visitors craning their necks to see the deity.

“If a puja committee has given a contract of Rs 1 lakh for lighting and paid Rs 20,000 in advance, how will it pay the balance amount later. Our relationships are based on trust but people who do business cannot wait indefinitely to be paid the full amount,” he said.

Subir Das of the 75 Pally Puja Committee in south Kolkata’s Bhawanipore said the court order caught the organisers off guard as almost all preparations have been made. “As law-abiding citizens we must ensure the court order is complied with. However, the order caught us off guard. Even the pandals have been inaugurated. We don’t know whether we will be able to recover the huge expenses,” he said.

“We hope the state government will issue fresh guidelines in the wake of the order,” Das said. Partha Ghosh, the founder-member of Forum for Durgotsab — an umbrella organization of community Durga Pujas, said a plan will soon be chalked out.

Ghosh, who is also an office-bearer of the Shivmandir Puja Committee, said his club does not have any problem with complying with the order as the pandal has been made in such a way that the idol can be seen from 10 metres away.

In Birbhum district, the organisers of the Bolpur Athletic Club Durga Puja said that since they have set up the pandal on a sprawling ground, complying with the high court order would not be a problem.

In a big damper on Durga Puja revelry, the high court declared all pandals across West Bengal no-entry zones to prevent the surge of COVID-19 cases in the state. A division bench of the high court comprising justices Sanjib Banerjee and Arijit Banerjee, while hearing a public interest litigation, said that no visitors will be allowed to enter the marquees.

For small pandals, barricades will have to be put up five metres from the entrance, while for the bigger ones, the distance has to be 10 metres, the court-ordered.

There should be ‘no-entry’ boards on the barricades, it said. The court also ordered that only 15 to 25 persons belonging to the organising committees will be allowed to enter the pandals.

The high court order comes amid red flags raised by medical experts and epidemiologists about a possible exponential spread of the pandemic in West Bengal after the reckless celebration of Durga Puja, the state’s biggest festival, as was witnessed in Kerala after Onam.