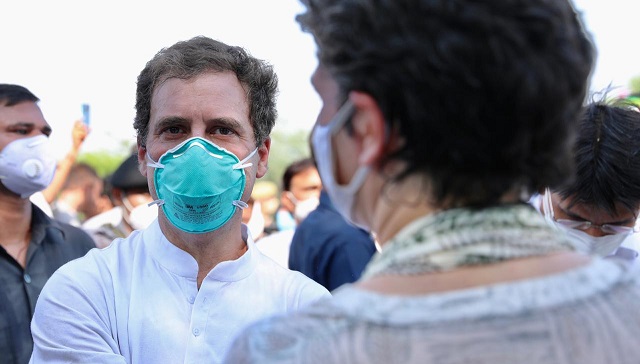 When first introduced 123 years ago, the Epidemic Diseases Act allowed colonial authorities to detain plague suspects, destroy or demolish infected property and dwellings, and examine passengers at will

Gautam Buddh Nagar Police lodged an FIR against Congress leaders Rahul Gandhi, Priyanka Gandhi Vadra and around 200 other party workers under The Epidemic Diseases Act for not maintaining social distancing and not wearing face masks.

The Congress had started a march on the Yamuna Expressway in Greater Noida after their convoy was stopped near Pari Chowk while they were on their way to Hathras to meet the family of the 19-year-old Dalit teen, who had died in a Delhi hospital on Tuesday, a fortnight after she was allegedly brutally gangraped.

The two Gandhi siblings and around 150 party workers were briefly detained by the police and later released on personal bond, a senior officer told PTI.

The Act, amendments to which were passed by the Parliament during the recently-concluded Monsoon Session, was also used to charge members of Tablighi Jamaat on allegations that they had violated the lockdown norms, The Times of India reported.

The colonial-era act of 1897, comprising merely four sections, was first enacted in the erstwhile Bombay state to combat the spread of the bubonic plague and was then used in the plans to contain the swine flu outbreak in 2009, the rampant spread of malaria in 2015 and the cholera outbreak in 2018. It has now been put into force to deal with the coronavirus pandemic.

Provisions of the Act empower Central and State governments to take certain actions to prevent the spread of a disease. The sections also sets penalties for disobeyance of orders issued under the Act and provides legal protection to public servants discharging duty.

ALSO READ:  Does Pervious Concrete have the Potential to Prevent Mumbai from Flooding?

The Act also empowers the government to take measures and prescribe regulations for the inspection of persons travelling by railway or otherwise, and segregation, in hospital, temporary accommodation or otherwise, of persons suspected by the inspecting officer of being infected with any such disease.

When first introduced 123 years ago, the Act allowed colonial authorities to detain the plague suspects, destroy or demolish infected property and dwellings, prohibit fairs and pilgrimages and examine passengers at will. During the British Rule, the issue of the ‘check-up’ of Indian women at railway stations and public places, especially by male health workers, received criticism for threatening the ‘honour’ of women, according to a report by The Wire. In fact, according to the report, it was the chief reason behind the Plague Riot of Kanpur in April 1900.

Among the limitations of the Act include the lack of a definition of the term epidemic, not defining duties of the government and the absence of provisions pertaining to air travel.

ALSO READ:  How Congress MP from Patiala stood for a Mumbai based Law Student during Lockdown, Things to Learn

After the recently passed amendments, an act of violence against healthcare service personnel would be a cognizable and non-bailable offence, inviting at least six months to five years of imprisonment and with a fine ranging between Rs 50,000 to Rs 5 lakh.

Additionally, people who damage vehicles of healthcare workers or clinics will have to compensate by paying twice the value of the damaged property. An investigation against such cases will take place within 30 days, and a decision will be announced within a year.

These amendments assumed importance amid reports of a spike in attacks against healthcare workers during the handling of the coronavirus outbreak.