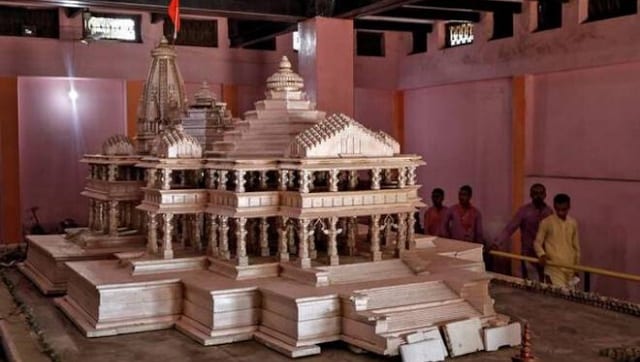 The issue came to light after a senior SBI official in Lucknow called the trust secretary Champat Rai to confirm if the trust had issued another cheque for transfer of Rs 9.86 lakh.

Ayodhya: The Uttar Pradesh Police have registered an FIR against unknown persons for fraudulently transferring Rs six lakh from the bank account of the Ram Mandir Trust through two fake cheques and attempting to transfer around Rs 10 lakh with a third cheque that was timely detected as counterfeit by the bank.

A case has been registered at the Kotwali police station in Ayodhya on a complaint filed by the Trust’s secretary and VHP leader Champat Rai, a senior police official said.

He said those behind the crime have withdrawn Rs four lakh from the fraudulently transferred amount while Rs two lakh is still in their account.

“Rs 2.5 lakhs was fraudulently transferred from the Trust’s account in State Bank of India (SBI) on 1 September and Rs 3.5 lakh on 8 September through a second fake cheque,” the FIR said.

The issue came to light after a senior official of the SBI in Lucknow called Rai to confirm if the Trust had issued a cheque for transfer of Rs 9.86 lakh.

“We give phone calls to all our customers before clearing cheques (with large amounts). I myself called the customer regarding the clearing of cheque for Rs 9,86,000 and the customer (Rai) received the phone after many repeated calls,” Mona Rastogi, deputy manager of the clearing department of SBI, told PTI.

She said it was certain that bank officials had called on the Trust’s registered phone number to confirm payments for the first two “fake” cheques of Rs 2.5 lakh and Rs 3.5 lakh each before clearing the payments earlier this month.

“Definitely the bank had called the customer before clearing the cheques of Rs 2.5 lakhs and Rs 3.5 lakh. The call records and details are being checked to ascertain if the customer had received the calls,” she said.

Rastogi said had Rai not taken her call, the third cloned cheque would also have been cleared because it appeared as original and the signatures too raised no doubts. “The cheques are cleared if the norms are followed and the signatures are found to be correct,” she said.

In his complaint filed with the police, Rai stated that the Ram Janmabhoomi Teerth Kshetra Trust has crores of rupees in its bank account and it was earlier unaware that the funds were fraudulently transferred from the account.

Ayodhya DIG Deepak Kumar told PTI that an FIR has been lodged at the Kotwali police station in this regard and investigation is being done.

“We have seized the account in which the fund has been transferred. Four lakh rupees from the account have been withdrawn but two lakhs rupees are still there,” he said.